more madness, in other words– early in the construction of the first “madness” post, i started having problems. the script kept bounding outside the lines, and the photos wouldn’t go where i had put them

— i just tried it for this post, and it went down well, thank guinness!! i had just had some work done on the computer, and with the addition of internet explorer 8 the poop hit the propellor, but i have changed browsers now and it seems to have fixed things.

so much has happened of late– first thing was that i finished off my painting in guidos, and it looks absolutely FABU!! 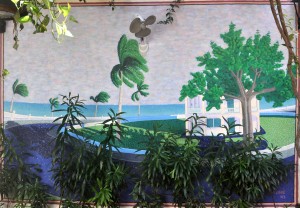 but more madness– all that blistered paint! i gritted my teeth and went on, got medieval on it’s ass– hell, i even used that blistering and got some wonderful effects on the wall with this technique. you may even be able to discern some of them by looking closely at this detail of the tree.

i put in an intense week of work on it, just what i had predicted was left so long ago when i had to leave it be, and it brought something new out of it and out of me. watching the sky go from a basically blue pastiche to something that shimmers with peaches and roses was marvellous. i also repaired all the places where the paint had peeled off, and all the places where the albaniles (masonry workers) had dripped plaster and limewater onto it, while they were finishing a wall up above. put different shadows onto the edifice, and lastly, in the spirit of “casually deliberate rusticity” that was employed in the rest of the renovations, i painted three extra bands around the whole piece, not using lines or any truing, but only by eye, so that it had a “hand made” appearance. just this morning i dropped off a disc of all images i took while doing the piece– maybe 120+ images– for the owner, so that she could see the piece in its’ entirety. i truly wish this piece well, and hope that it lasts for a while, as there is a lot of sweat and concentration left up on that wall.

on to more madness– merida, in august. hot. boogering hot. i went to visit with my friend jeremiah, and originally to check on some boats with another friend, but he cancelled out at the last minute. will have to do it soon. i did manage to do something though– made a payment on my fideicomiso, the trust in which i own my property. 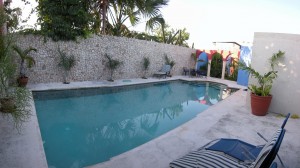 but the only thing i could trust in merida was the short-lived relief that the pool gave me– as hot as cozumel is, merida is waaaay up there from here!! i even got heat rash after a couple of days– egad!! madness!! 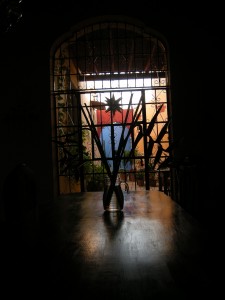 but jeremiah’s house was cooler inside, and we managed to make and eat several great dishes, while sucking down some great wine– and, of course, in the colonial spirit espoused by all in merida– more than one gin and tonic!! there are more photos of jeremiah’s place on my facebook account, under “chez j”, if you’d like to peruse them.

but back again to cozumel hunkered down under a load of east indian food, courtesy of “a taste of india” in cancun, i returned. lots of stone work i have been doing, but that is fodder for another day i am afraid– i have already blathered on too long today, and have stuff to do. NEXT time……