we saw our protagonist, he was busy trying to breathe some zest into his painting, living on the knife edge between craft and art, and generally having to gird his mental loins to go beyond what had come before. in the end i got to a point where i thought it was pretty finished– and so, i let it lay fallow for a week or so, just so that i could find a little distance between me and it, so that i could begin “seeing it” once more. it seemed to work, too– suddenly i got an urge to do some small things, and it quickly exploded into three days of intense painting and thinking– and then, as they say in the movies, it was over. 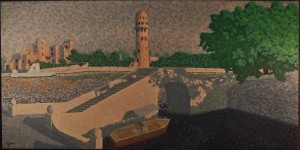 i finally had the time a couple of days ago to pull out the lights and everything in order to reshoot the piece with my trusty digital SLR and a good lens, to take the wowing out of the image, and this is what it shows– “peach abrigo”– 2010, acrylic, 55″X27.5″– i hope that you like it as much as i do. more than a couple of days have passed since i finished, and as the process fades from my mind, i like it more and more, especially during the morning hours, the light enhanced by the light of the day. 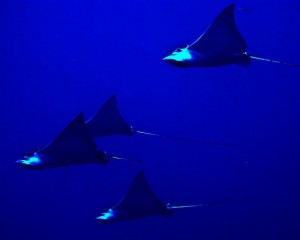 i could now say “on with the next crisis”, as i am fond of intoning, but really the past few weeks of my life have been spent almost every day that the port has been open diving. there have been a fair few people in town this last bit, and with it comes the work. the diving has been good to excellent of late, and i have had the opportunity to go to the north once in a while to do “the eagle ray tank”. a couple of days ago we went there and saw a formation of a dozen eagle rays, out along the wall and slightly above us, their wings almost unmoving as they glide forward against the current. glorious and graceful dancers, they!! quite the show really, 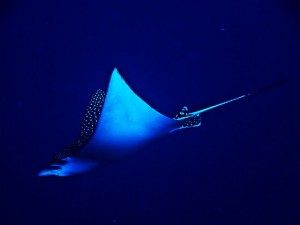 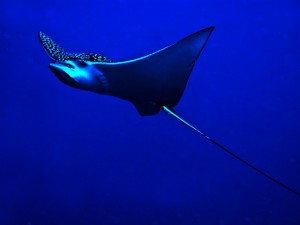 magical and magnetic– we couldn’t take our eyes off them!! they finally passed by, and broke up into tinier formations of twos threes and fours, passing below us, and finally coming up and along the wall right alongside us, passing us and then circling around behind us– a truly dazzling display!! 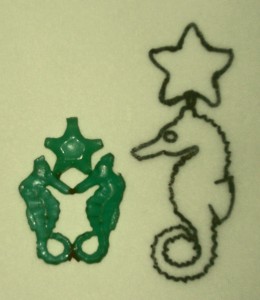 in my few spare moments in which my brains still were inhabiting my body of late i have been working on several things– a tshirt design for a boat and also my newest piece of jewellery, the large seahorse. in the end i plan on working in a sea star along with this piece, and some pearls as well, but for now i will begin with the seahorse itself. a technical thing to cut, as i have to do it in two halves, to keep the weight down as much as possible. each half will need to be very similar, so that when i solder them together they don’t look like the dog’s breakfast. this will also enable me to make them into earrings. first i took the drawing you can see up above, and then i cut a “stencil” of it out of sheet silver (really the best material i had around– “spare no expense, give the cat another canary!!” as my mother was known to say), which i used to draw a form onto the wax itself. 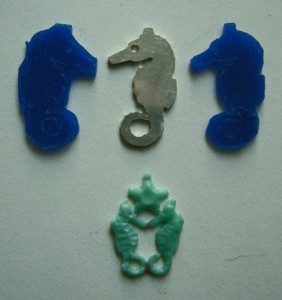 you may be able to see the lines in the blue waxes shown above, as i slowly begin to carve them down into a “cookie cutter” shape, after which i shall further work them to give them a much more 3-D look– you’re going to have to wait to see that though, as i am still elbow deep in the process– and tomorrow i must go out and dive again, the eagle ray tank– will send you some eagle ray energy from there.

until then, happy new year, everyone– let’s hope it is a good one